I was asked to speak about our experience with adoption at a little event tonight with other adoptive families. I think I frightened all of the people who came. I was honest and clear about the scary and hard parts of adoption, and the responsibility and ethics it requires. I don't think I was encouraging. Adopting Verity has been one of the two greatest gifts of my life to date. It has also been the single hardest thing I've ever done, and the work of helping her feel right in the world won't ever end. Adopting is not for the faint of heart (although little of parenting is.) Getting to the moment where we knew that she would come home with us and that she was really and truly our daughter was worth it in a way I can't properly articulate. I would have done anything under the sun to make it so. It was also filled with more pain and fear than I think my heart could ever take again. I have never been laid so bare and defenseless or been so close the unmitigated loss of someone making such a sacrifice out of love, as Verity's birthmother did. And our adoption process was simple and smooth. Is it worth it? Oh heavens yes, and yes, and yes again. She is and was worth anything and everything. But I don't feel like I'm at the point in this journey where I'm able to sugar coat the truth.
Posted by Sarah, Ben, Adeline, and Verity at 6:36 PM 1 comment:

I know I'm late to the Halloween game - but bear with me. Last year at this time we were matched with a con woman, gestating a very possibly imaginary baby, and on October 30th we carved a pumpkin for that baby. I carved star, and when we lit it, the flame guttered out, which as omens go, is not a great one.

We then carved a tiny heart into the back of the pumpkin, trying to get some more oxygen to the candle, and the flame stayed lit, and cast a heart shaped light onto the brickwork of the house. 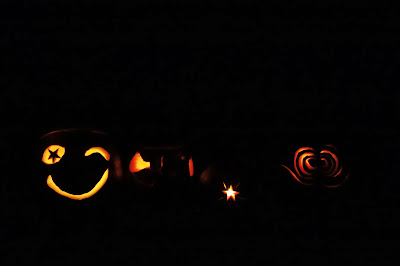 On November 1st, we discovered that we had been conned, and pick up the shattered little bits of our hearts for the 5th time in 5 years, and moved on. I seriously considered throwing in the towel, another child was clearly not in our future, and I didn't know if I could really bear it.

What I didn't know then, is that three weeks later our daughter would be born. That at that very moment, curled up snug in her first mother's belly, was a baby girl, almost ready to greet the world. 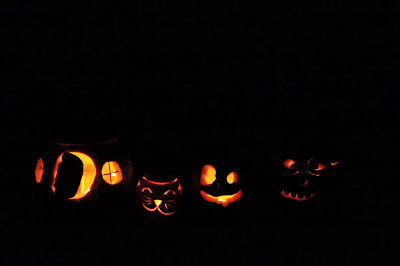 There are four pumpkins on our porch, and the little kitty pumpkin was carved on behalf of our daughter, who really quite adores cats. She signs "kitty" enthusiastically whenever she sees one, and has even learned how to pet our cat Billy, very very gently. She is real, she is here, and in less than three weeks, she will turn one.

What a wild and beautiful ride.
Posted by Sarah, Ben, Adeline, and Verity at 5:02 PM 1 comment:

Sarah, Ben, Adeline, and Verity
Georgia, United States
We are Ben, Sarah, Adeline, and Verity: a family of four built through biology and domestic newborn adoption. After five years of secondary infertility and recurrent miscarriage, which was hard as heck, we are so very happy to have completed our family!